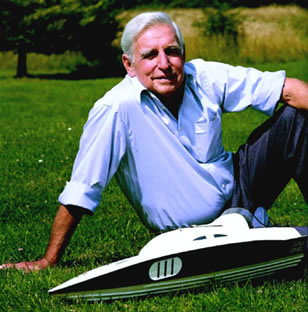 Born in Karachi in 1926. Educated in India and France. Served in the RAF during WW2 demobbed in 1948. Studied Aeronautics in England

Returned to India in 1950 as designer and yard manager in the family boat building business, left for Europe and America in 1960 arriving in Italy in 1961 to set up with Cmdr Atillio Petroni, Canav Navaltechnica.

Maybe it is deemed by nature, that 2 geniuses are born half a world apart yet follow the same lateral thinking that propels them into the history books.

In the case of Ray Hunt and Sonny Levi their impact on the design of small, fast, yet safe sea going craft using the Deep V principle, was influenced by of all things Sailing! Ray Hunt in America, was already renown for his Yacht designs, Sonny in Bombay, working in his father’s boatyard already had a love of yachts and sailing, loved observing the Arab Dhows that ploughed through the Arabian Sea carrying the trade between India and the Middle East, were they, with their graceful bows implanting the seeds of that instantly recognisable Levi line.

He was born in Karachi before the partition of India then moved with his family to Bombay, after travelling the world he eventually arrived in Italy in 1961 where the Canav Navaltechnica yard in Anzio was set up and it was from here in August 1961 that the name of Renato Levi was launched onto an unsuspecting world with a powerboat by the name of ‘A Speranziella.

Through the revived sport of powerboat racing Sonny was to establish his name in the world as an innovative forward thinking Naval Architect and designer who has collaborated with most of the famous names in the marine industry producing a portfolio of designs that has not to date been rivalled in its range and complexity.

The one aspect of Sir Max Aitken’s legendary Cowes Torquay was to improve the breed! To stimulate advancement in the design, safety and seaworthiness of everyday craft, the designs that flowed from Mr Levi’s hand after his escapade in that first race, were to leave others floundering.

‘A Speranziella was designed and built within three and a half months after Sonny was enticed to enter the first Cowes Torquay at the Earls Court Boat Show in January 1961. She was built with the proceeds of the sale of his fathers boat Speranza Mia (plus his and wife Ann’s savings), Speranza had been shipped back to Italy prior to his fathers retirement and return, she had been Sonny’s first complete design of a fast cruising vessel and utilised several unique building techniques in the day including use of epoxy resins, glass matting and exotic woods. 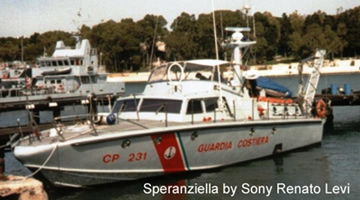 ‘A Speranziella was to be the prototype for a new range of cruisers hence the race entry as a proving ground, she was also the first Deep V design built in Italy, a 30 footer powered by 2x 300hp Crusaders with a speed of approximately 40 knots. The story of the race is well documented with Levi leading at one point till the gremlins set in, eventually finishing sixth.

The battle scars were many including split and collapsed fuel tanks, an electrical fire, failed fuel pump and serious fractures in the structure of the hull and cabin, in Sonny’s words "I learned a lot from that race". 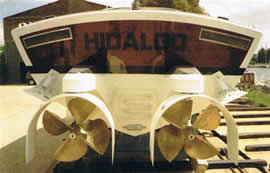 She was repaired with some modifications and won the 62 Viareggio Bastia race, then entered in the Cowes Torquay where again Gremlins hit home, this time with the engines. Rebuilt and redesigned for the 63 race with 2 new Ford Interceptors she won and the path was set.

1962 brought an order from soon to be noted designer Don Shead, the little "Trident" a 23 footer, Spumante similar to A Speranziella but powered by GM diesels for Mr A. Hubbard plus the mighty Maserati powered Ultima Dea for Fiat boss Gianni (Jonny) Agnelli. IOW builders Bob and Wally Clarke were soon building the Trident range and then followed the glassfibre, Corsairs.

1963 was the year of the big win, then came the request for a circuit racer from Don Shead for the Paris 6 hours, the result was the 17ft needle nosed FiFi. This was quickly followed by Melly and Merryfield’s 16 ft Thunderbolt X, (the precursors to the Delta shape) which brought victories for their owner/drivers.

It was during a visit to Italy in 1964, by none other than Vosper designer Peter Du Cane, that he and Renato discussed preliminary drawings of a 36 ft design. Peter offered to tank test a model of, the model showed considerable promise and in January 65 the drawings matured into the most famous Levi design of all when the Gardner Bros commissioned the world renowned "Surfury" and the Delta line was born.

Never one to rest on his laurels the designs and innovations flowed endlessly, the beautiful fast commuter boats for the Mediterranean jet set, Barbarina for Count Mario Augusta, Robert Olivetti’s Hildago and Agnelli’s G. Cinquanta.

Then came the work boats based on the powerboat hulls and the Naval patrol vessels rapidly followed by the experimentals, the ram wing Fat Cat for Lady Aitken, Golden Griffin a catamaran, the Delta experimental extended prow, the winged Monohull "Dart" and the futuristic Arcidiavolo. 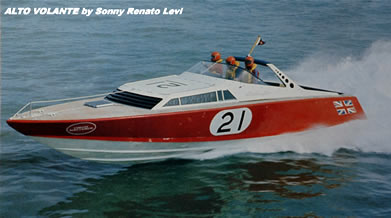 The Blue Riband winner, Virgin Atlantic Challenger 2, which use Levi Surface Drive, Alto Volante and the unique Nazca, then the love of his life the yachts.

Sonny Levi has had countless imitators, his designs have been produced worldwide, he also has thousands of "fans" including myself ever since 1991 when I saw Virgin Atlantic Challenger 2 Blue Riband Record Breaking Video. Whenever the talk is of the early years of modern day powerboat racing there are two names which are always forever linked to its history and spoken of in god like esteem, Levi and Surfury.

It would be impossible to list the all the craft that were born from Sonny Levi’s hand but you only have to scan the world’s harbours where they will stand out from the crowd, unfussy, gentle curves and like all good designs totally distinctive, all bearing the Levi touch, the mark of a genius.

WARNING: Please Do Not Click any Foreign Ads Banner Below!!!

Send to a friend